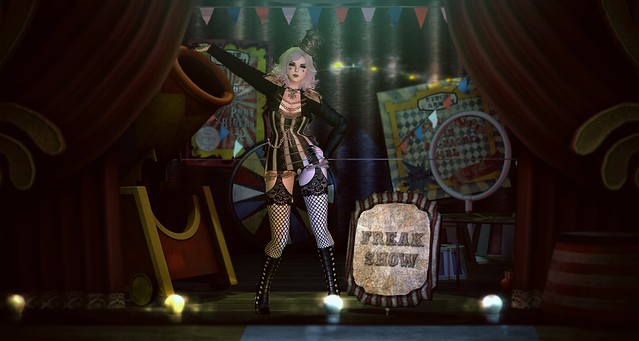 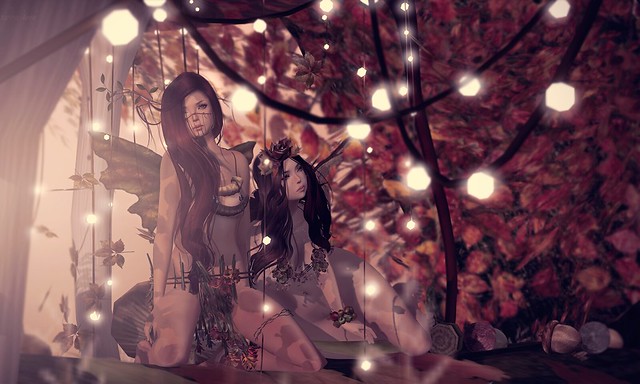 So this post is kind of late and I apologise, I’ve been super busy the past few days! But it’s here now and I’m with Noms again! We’re cute little autumn fairies! As always, if you want to see Noms’ outfit credits, check out her blog!

I have some exciting news about Nouveaux, the shopping ‘mini mall’ for new designers that I co-own with my friends Zee, Horror and B. A new designer joined us and she’s a very talented skin creator! Skins are usually hit or miss for me. I very rarely look good in any other skins aside from Glam Affair but Chickadee skins really do look great on everyone in my opinion. Check out how gorgeous Wicca Chun, Luxy, Danni Ravinelli, Flossberri and Loony Columbia look!

Thanks for posing with me again Noms~ 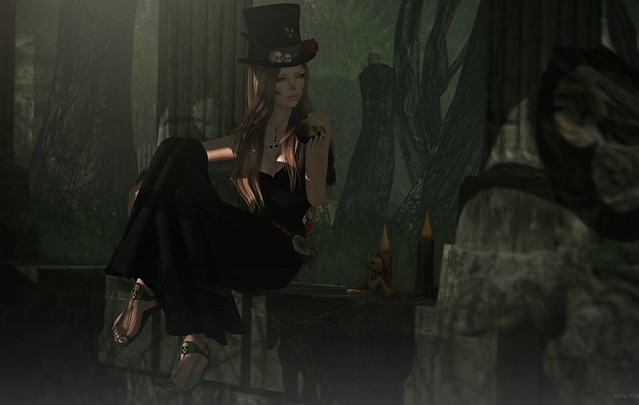 A new round of The Fantasy Collective just started up and the theme is ‘Bayou’! So there’s lots of swampy, voodoo, witchdoctor goodness to be found.

We all know I’m a serial ‘re-purposer’. Because I like to have matching jewellery sets, any time I get a necklace, I just have to make copies and turn them into belts, bracelets, headdresses, anklets, even sometimes earrings! The ‘belt’ around my waist is actually a necklace by Enfant Terrible called ‘Witches do it better’ and it comes with a very nice vest to match too (you can just about see it peeking out from behind my luxurious Tableau Vivant locks!). 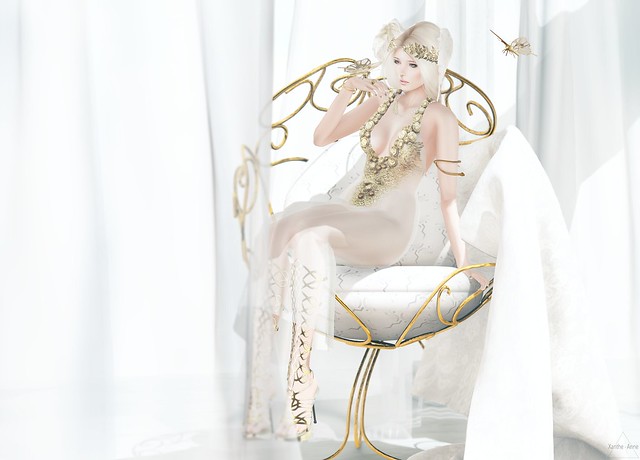 Hey! Guess what! There’s a new round of Collabor88 on! But it’s not just any old round of C88. It’s the 3rd Anniversary round! Take a step back in time and into Greek Mythology with tons of designers! Guest designers who have delighted us from previous rounds have returned and are joined by some new faces and of course the regulars are still there too!

Collabor88 is a very popular event, but it does last until the 7th September. So even if you can’t get into the sim now, you can always go another day!

Have you been to The Chapter Four yet? No? Well go! There’s a bunch of cute stuff this round from the regulars as well as couple new designers popping in too! Xiaj has popped these messenger bags into a gacha in a whole bundle of different colours and designs from camo to polkadot (including my favourite, florals!) so you’re bound to win something that you’ll love! Offbeat has a cute cardigans gacha that I pumped so much money into! You can buy this collar as an extra add-on for the cardigans but I like collecting these to go with my other shirts as well! Since mesh isn’t the best thing to layer with, these add-on collars are great for spicing up that tank top you’ve had knocking around for ages without a bunch of scary clipping or utilising clothing layers!

Okay well have to been to Nouveaux yet? Not either?! Come on I’m trying my best here! Pixicat, our resident mesh-master has created this adorable knotted top and jeans set! They come in a variety of colours and, you can’t see under my blazer but, they have really cute cut out shoulders! Both are 100% original mesh and both are a real steal too with the jeans only coming in at 100L$! You really won’t find quality like this for prices like these so do check out Pixicat and show her some love!

Now, you must have been to The Arcade by now, right? Good! This cute kitty-ear bowler hat is one of the common prizes from Enfant Terrible’s machine and oh my goodness is it not just the cutest? Hats with cat-ears are my weakness! I tipped it to one side to show off this cute bun hairstyle, which is a new group gift from Milk! The group is free to join and Katt puts out a new gift every month so definitely join the group and stay there! All the colour HUDs are included as well so you blondes and redheads need not fear!

Enchantment starts on saturday and this round is all about Little red riding hood! My pretty German-inspired dress is by Junbug at the event and comes in three cute colours, it was actually specially made to match Enfant Terrible’s wild flowers headdress and Ballerina flats as well as sort of a collaborative project, so you guys get a whole outfit from it! The poses and basket are one of the many items from one of the event’s sponsors, Elephante poses. They have a wide variety of items for sale from makeup to slink nails to poses and props! The wolf sneaking up on its unsuspecting prey in the photo below is actually a wearable mesh pet from Alchemy and is the result of another collaborative project between Nina Helix of Birdy/Alchemy and Tyr Rozenblum of Aux! Nobody is gonna mess with you with him at your side! Remember, all the items being sold at this event are exclusives, meaning they will never ever be sold again ever! So grab your basket and hood and get shopping!

I know I very rarely take part in Berry’s Memes but I’m certainly going to try to from now on. So I’m going to kick it off with Berry’s interview meme! I got my best friend Zee to interview me as well as opening up my Ask.fm profile so people can ask anonymous questions there if they want to! I’ll warn you now, Zee and I are as mad as a box of frogs when we’re together!

Do you see what I mean now? I’ll get on with the real interview hehe.

I also got a few questions in my Ask.FM box so I’ll answer some of those too!

Thank you so much! A lot of my inspiration comes from the items that I blog. If I have a pair of shoes that would look great in a fantasy themed outfit, I’ll try and work them in and it all kind of clicks together from there. But I’m always looking on Flickr at photos other people have done for inspiration too.

I love dressing up more than dressing down. High heels and glitter all the way!

Every time I go on holiday, I buy a post card for myself to put on the fridge! But I also put postcards that other people have written for me too.

I’ve only ever made one shape and that’s my own haha! But thank you!

Actually, yes! Turn off the adult filters on the marketplace and you’ll see what I mean haha!

Oops! Sorry Shae, I forgot to check my fanmail box before publishing. Here’s a little section just for you!

If you could have one blog wish fulfilled – what would your wish be and why? More wishes! That’s the general rule isn’t it?

Have you ever published an embarrassing mistake without realizing it until it was live and what was it? I can’t remember any specific ones but usually it’ll be something to do with autocorrect haha!

Who is your biggest blogger crush (in a bloggy way, not a weird baby having way)? I crush on Jay Tedder Murs so hard. He’s a beautiful beautiful man.

Anyway that’s it from me today! I hope you know a little more about me now. And sorry for the wall of text but I got a helluva lot of questions! Sorry if I didn’t answer yours!